Nellise Childs' Weep For the virgins

Thanks to a collaboration between the families of Robert Ardrey, Nellise Child and The ReGroup Theatre, Weep for the Virgins and Casey Jones join the previously published Group Theatre play Thunder Rock in Volume II of The “Lost” Group Theatre Plays.  Volume II features a Foreword by Wendy Smith, author of Real Life Drama and essays by the playwrights families and ReGroup founder, Allie Mulholland.
Weep for the Virgins: A Bitter Comedy by Nellise Child was presented by the Group in 1935 under the direction of Cheryl Crawford and featured the talents of Jules Garfield, Phoebe Brand, Eunice Stoddard, J.E. Bromberg, Margaret Barker and many more.  In Weep, we meet the Jobes: 3 sisters, the original dance mom, a father with dreams of fortunes in frog legs, and his Bible toting, quoting mother. Employed by The Blue Ocean Cannery, the untalented sisters are lead to believe they will have famous lives waiting for them… if only they can get to Hollywood, by whatever means it takes. Act by act, each of the sisters meets her ruin, driven there by their mother’s poisonous love.
In the first on his two plays for the Group Theatre, Casey Jones, Robert Ardrey tells a tale of man fixated on a machine. Like his namesake of the famous ballad, Casey grows up a man of the railroad.  So much so, that he often neglects his family in favor of his career and his love for his locomotive. As he approaches his 50th birthday and begins to have trouble with his eyesight, his days with the railroad may be coming to an end, and he is forced to question his identity. Nearly a century before our obsession with the computer, iPad, and other gadgets seem to consume our everyday life, Ardrey predicted how man would become “willing slaves to their machines.”
In the classic play Thunder Rock, successful author and former reporter, David Charleston becomes so disturbed by the state of the world; he takes a job as a lighthouse keeper and the sole resident of Thunder Rock Island. When he notices a memorial plaque dedicated to a sailing ship of immigrants who fatally crashed on the island 90 years prior, he starts to imagine how ideal life was in their time. Soon, they begin appearing to him. At first he controls them, until they decide to teach him about the eternal struggles of life. This classic play became one of the most important plays in Europe during World War II and played continuously in London throughout the bombings.

1931- was the Group's second prodUCTion, and though tremendously received by the mezzanine crowd, it was dismissed by critics and shortly closed. It would become one of the Group's biggest commercial failures, though after a public reading in 2010, the ReGroup believes it is more resonate now than it was 80 yrs ago. 1931- is the story of a young man, Adam, who loses his job early in the play and is confidant that a man of his ability can quickly find a new job. As adept as he may be, there is no guarantee of employment, and we watch as Adam slowly succumbs to his environment until he is left with one choice...

John Howard Lawson, who will hopefully reclaim his spot on the list of top 10 American playwrights, was the first playwright to contribute two plays for The Group Theatre. He was a role model for Clifford Odets, and his writing style is clearly evident when reading the great works of Odets. The first of Lawson's Group play was Success Story in 1932. It is a tale of an up-and-coming advertising associate Solomon Ginsberg, during and after the stock market crash. A clear predecessor to Odets'Golden Boy and even the television series Mad Men, the play questions exactly what qualifies 'success'. It would run 121 performances and be turned into a filmed titled Success at Any Price starring Douglas Fairbanks Jr.

His second Group play, Gentlewoman opened on Broadway only two days after his play The Pure in Heart. Though it would only last a few weeks, it became an important play in American Theatre History. Gentlewoman is concerned with socialite, Mrs. Gwyn Ballantine, who falls for the "inspired Bohemian" Rudy Flannigan. When Mrs. Ballantine finds out that her husband is guilty of Bernie Madoff type business deals, she is tempted to pursue her desires for the younger poet. Though she finally has met her ideal mate, can she give up her sophisticated lifestyle in exchange for love? The play has historical significance as Stella Adler, who originated the role of Gwyn, became so disillusioned with acting due to her frustration with the role; she sought out the help of legendary teacher Konstantin Stanislavsky. Through her studies with him, Ms. Adler brought her own interpretation of his method back to the United States, and it deeply divided the Group Theatre. Eventually, it would lead to her parting from the Group and forming her own very successful school. 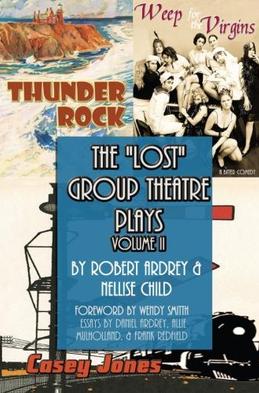 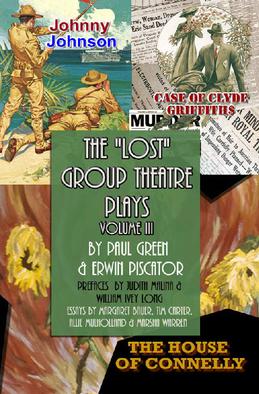 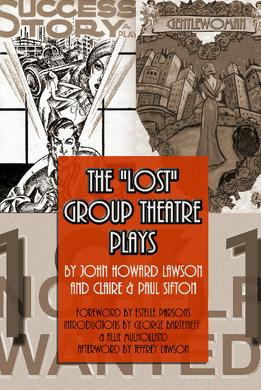 The Group Theatre's first play, THE HOUSE OF CONNELLY, Paul Green's poetic tale of the dueling South, past and present, was heralded by critics and audiences alike when it debuted in 1931. Will Connelly, the wayward heir to the once famous Connelly estate falls for the tenant farmer's daughter. Does she love him or is she just after the family name? This epic tale of past versus the future and family secrets is as timely now as it was 80 years ago! Following in the steps of his Pulitzer Prize winning In Abraham's Bosom, this is another example of Green's groundbreaking writing which gave African-Americans legitimate leading roles in a Broadway show - typical of his legendary social awareness.

JOHNNY JOHNSON, Green's 2nd play for the Group, is a shockingly potent comedy that shows us the folly of blind patriotism and war. Johnny, championed as an artist who celebrates peace, gets swept into the war, and finds a way to solve it - through conversation. He is considered a traitor and a mental patient for wanting to solve the war without killing. Presented as a staged reading directed by Estelle Parsons in 2011, the show still packs a wallop. You will laugh, you will cry; you will never forget Johnny.

The first time ever in print - Erwin Piscator's CASE OF CLYDE GRIFFITHS retells the popular true story depicted in Theodore Dreiser's best selling novel An American Tragedy (and later basis of the Elizabeth Taylor/Monty Clift classic film A Place in the Sun). Not only does Piscator tell the story, he focuses on the sociological ramifications of the tale. This is the closest the Group ever came to producing an abstract play. Presented a year before Thornton Wilder's Our Town,due to the tremendous similarities in storytelling, it's hard to imagine Wilder wasn't heavily influenced by Piscator's unique way of theatrical technique.