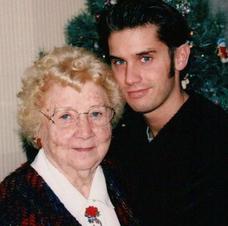 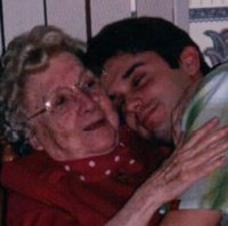 arlene Stites closed her unforgettable blue eyes for the last time on October 2, 2010.

She could do anything. Don’t believe me? She made gunpowder in her kitchen. She jumped from one moving car to another. She taught Sunday School for decades. She put panty-hose over her head and went trick-or-treating as a senior citizen. She grew prize-winning flowers and wrote award winning poems. In her 80's, she was one of the most popular females at universities all over the country and was likely the only 83 year old with a Tickle-Me-Elmo on her Christmas list. Besides her unique traits, her love of animals and church, she was most devoted to her family.

Born Arlene M. Spiess, in a log-cabin with a dirt floor, she was not only a devoted daughter but a sister of 5 other siblings. She grew up west of Archbold on a 40 acre farm, and learned to hunt, farm, fish and worship Christ from her parents. Living during the Great Depression, she was always a resourceful woman and knew how to live off the land. In 1936, she married Kenneth Stites and moved to Wauseon. More than being a farm wife who brought picnics to the field, she was actively engaged in farming. She drove tractor, made hay and straw and milked cows. She also helped her husband with his kennel, often nursing runt or orphaned puppies by feeding them with an eye dropper. As a mother, she raised two boys during the time of World War II. She was a supportive mother who always tried to get them interested in anything and everything. This included 4H and FFA, as well as buying a chemistry set where they made gunpowder in the kitchen! As a grandmother, she was more than just a babysitter. A night with Grandma Stites meant there was an activity planned. Whether it was painting suncatchers and ceramics, making cookies, or telling each other stories. She tried to share her active imagination with all her family and get them as interested in life as she was. She often took them on trips to Sauder’s Village, where she was a lifetime member due to her contributions, to show them what life was like when she was a child. As her grandchildren grew, she became known around campuses from Ohio to New York with her weekly boxes of cookies to her grandchildren and all of their friends. Daughter, wife, mother or grandmother, she was famous for her bountiful holiday parties. These weren’t limited to the usual Thanksgiving and Christmas feasts, but also include Easter, Valentine’s Day and birthdays.

She was a life-long devoted Christian. Besides regularly attending church with her parents, she went on to teach Sunday School for years at the Bethany United Brethren in West Barre. She taught the Willing Workers class which primarily consisted of the 25-50 year olds. She went on to teach Sunday School at the Liberty Chapel United Methodist Church in Liberty Center. After moving to Fairlawn Haven, she spent the last decade of her life rejoicing in the Fairlawn Chapel.

Animals were also a huge part of her life. To name just a few, and maybe one or two more, amongst them were goats, ducks, banty roosters, hens, rabbits, pigs, lambs, guinea pigs, peacocks, cats, puppies, and ponies. Fish were always a big part of her life. From childhood to adulthood, she and her family took almost yearly fishing trips to Canada or Northern Michigan. Not only was she an expert with a rod and reel, she could clean the fish faster than anyone, and cook them better than anyone around. Of her animals, of note are Tuffy the cat. Tuffy was around when her boys were little and was known to fight dogs 10 times bigger than him. Also there was Inky the Crow. Inky was taken from a nest in her vast spread of pine trees, and she raised on milk and bread. Then there was Bandit the baby raccoon she took in while her husband was battling cancer. Bandit was an unusual pet that brought of them a lot of enjoyment during this trying time. Last, and certainly not least was Lucy the blue-eyed, white haired cat that was born in a tree. Lucy came to live with her in the last years that she lived at home and never left her side. After Arlene moved to the nursing home, Lucy lived with Arlene’s son Kent, but whenever Arlene would come for a visit, Lucy would crawl right up on her lap. This went on for 14 years. Lucy passed just two weeks before Arlene.

Besides all of these wonderful accomplishments, the thing that sets Arlene apart from the average person the most is that she could do anything. She was a self-proclaimed "jack of all trades" though many would argue she was more of a Renaissance Woman. She tried everything, and it seemed to come to her with ease. She loved her hobbies, and it showed. She was an expert gardener, growing a vegetable garden her entire life along with prize-winning beds of flowers. Anyone who ever tasted her cooking knew she was a masterful cook and baker. She was also skilled with a needle and thread, whether it be making clothing, Christmas ornaments, dolls, wall decorations, Halloween costumes (including her infamous Grandma Bear costume) or quilts, which she made 2 for each of her 5 grandchildren. One of her most private personal accomplishments was her poetry. Whether it was religious, sentimental or downright humorous, it was always crafted with care. She placed 3rd out of 210 entries in the "Tribute to Erie Sauder" poetry contest in 1999. She could refinish furniture, give haircuts, shoot hawks from 100s of feet away and was masterful fisher.

Though she lived a long 98 years, the things she accomplished would have taken many others several lifetimes to accomplish. She was not just a relative to her family, she was a friend, a teacher and an inspiration.

She will never be forgotten and can never be replaced. She was my biggest supporter and cheerleader.  Without her, the ReGroup would never have happened. She was/is my best friend.  -a.m.